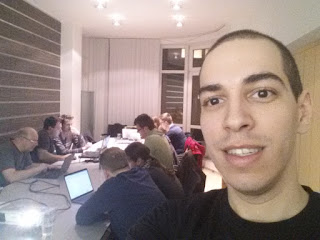 Yesterday, I've facilitated an introductory workshop about the Go programming language. So far the feedback has been positive, both during our retrospective at the end of the workshop, the corridor conversations later, and comments on the event page.

There were 9 participants, some from Red Hat, some from Solar Winds, some students, some unemployed, and some from other companies which I do not recall. It was a very good team, and I attribute the success of the workshop to them.

They were familiar with C, Java, C#, Python and perhaps other languages. It was either their very first contact with Go, or they've had limited contact with it in some recent project.

We had only two hours to pack a good deal of content. There were, however, some key points that we made sure to include in those exciting hours:


The official Go documentation is really good, and, thus, part of the workshop was about following along The Tour of Go. The other part was about testing, and how to approach the coding exercises from the tour using Test Driven Development.

Due to our time constraints, we covered all of the "Basics" topics from the tour, and we had about one hour and twenty minutes of effective hands-on coding, which I consider great.

During the retrospective, I remember people talking about function closures, error handling in Go, testing. It was satisfying to see it was useful and everybody had something they've learned to share with the group.

I've heard from one participant that he got so excited about Go that he kept playing with it until late in the morning...

A Tour of Go - Workshop from rhcarvalho
Por Rodolfo at 5:47 AM

Great Rodolfo!
I wanna do some workshop of Go here in São Paulo, your slides gonna inspire me!

Great to hear that, yes go for it!